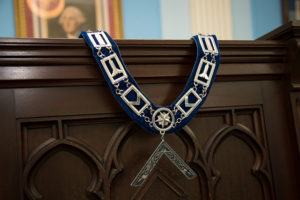 A Word from the Worshipful Master, Elect

I would like to thank you for electing me as your Worshipful Master. I am humbled that you would place your faith in me to lead the lodge for the next year. St. James has over 176 years of history – a history to be proud of. I have every intention to make the next year no different. The office of Worshipful Master comprises three parts. It is an office to govern, a title to respect, but most importantly a job. This is not a responsibility that I take lightly, and I pledge to serve the lodge to the very best of my ability.

I am looking forward to the next year. St. James has a bright future, but in order to achieve that future every Brother must do their part. The most important part of any job is showing up, so Brethren, please come to lodge. Some of you have not been in a while, and we miss you and would love to see you back. Also, please bring worthy men as visitors to join us during our meals. We cannot expect to grow if we isolate ourselves. Let our community know that Masonry is here! We all know two or three men who would be a good Mason – someone who is already a Mason in their heart. Do not be afraid to tell them that they would make a good Mason. Doing so does not violate the prohibition against soliciting membership, and puts the ball in their court to ask “Well how do I become a Mason?”

Thanks again Brothers. I’ll see you at lodge!

The Lodge elected the following officers on November 5, 2020:

For a full list of the elected and appointed please visit our officers page.

Greetings brothers. It’s been a pleasure serving in this office. I still don’t have everything 100 percent down pat, but I’ll work to continue improving in this role through 2021.

We are quickly approaching the end of 2020 – may it forever stay in the past. Before we officially hit the holidays, I’d like to remind everyone to pay their 2021 dues, if they haven’t already. Regular members should have received a statement last month. If you did not receive a notice, you can check your balance in the Grand View system. Members now have the choice to pay online as well as the traditional method of paying by check to P.O. Box 444 Baton Rouge, La 70821.

If you have any questions, you can reach me at cody.cifelli@gmail.com.

The Parable of the Talents

A personal favorite, and seldom referenced Bible story is the Parable of the Talents in Matthew 25:14-30, which conveys a lesson that I feel perfectly illustrates the cause of our fraternity.

In summary, a master entrusts his men with talents (or bags of gold). In the first, he entrusts five talents. In the second, three. In the third, one. The first two put their master’s gold work and invested it through trading. The gold being invested and put to use in the world, multiplied, allowing the men to return to their master with more than they were entrusted. The third servant, meanwhile, buried the gold.. He did not invest it, or trade it, or put it to use.

The master praised the first two for their faithful and diligent work, invites them to share in his happiness, and promises to entrust them with more in the future. The third servant was scorned for his laziness and passivity, thereby allowing his master’s gift to go unused, leaving nothing changed in the world.

The lesson here is inherently tied to our role as craftsmen. It is a call to action, that men of God should be productive in putting their gifts to use, inspiring others to do the same,  and leaving the world a better place.