“Always do right. This will gratify some people, and astonish the rest.”
– Bro. Samuel L. Clemens (Mark Twain)

For centuries,  Freemasonry has earned a reputation for being mysterious. While this does create an allure,  the lack of clarity leaves people with unanswered questions and the fraternity with a bit of a perception problem. There are centuries of history around this: the papal condemnation in 1738, the operation of the Anti-Mason Party (America’s first political party) from 1828-1838, and more currently these fringe theories associating Freemasons with the Illuminati. 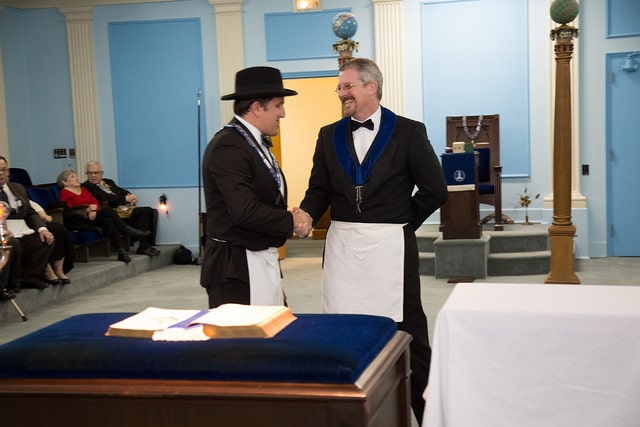 Freemasonry is the world’s oldest and largest fraternity. Its history and tradition date back to the late Middle Ages. Its one purpose is to make good men better. For centuries, its bonds of friendship, compassion and brotherly love have survived even the most divisive political, military and religious conflicts. Freemasonry is neither a forum nor a place for worship. Instead, it is a friend of all religions, which are based on the belief in one God.

Many of our nation’s early patriots were Freemasons, as well as thirteen signers of the Constitution and fourteen Presidents of the United States beginning with George Washington. Today, more than four million Freemasons around the world come from virtually every profession. Within the Fraternity, however, they all meet as equals. They come from diverse political backgrounds, but they meet as friends. They come from virtually every religious belief, but they all believe in one God.

One of the most fascinating aspects of Freemasonry has always been how so many men, from so many different walks of life, can meet together in peace, never have any political or religious debates, always conduct their affairs in harmony and friendship, and call each other ” Brother!”

Freemasonry is a fraternity so old that its origins have been lost in time. The general consensus is that it birthed from the stonemason guilds who built the great castles and cathedrals of the Middle Ages and might have been influenced by the Knights Templar, a group of Christian warrior monks formed in 1118 to help protect pilgrims making trips to the Holy Land.

Freemasonry was formally established in 1717 when the first “Grand Lodge” was formed in England. Today, there are about 13,200 Masonic lodges in the U.S.

WHAT IS A FREEMASON?

A Freemason is a member of the world’s oldest and largest fraternity. Masons join together because:

WHAT DO FREEMASONS DO?

Masons are men of charity and good works. In fact, Masonry is the world’s leading charitable organization, contributing nearly $2 million a day to charitable causes which they have established themselves. The Shriner hospitals for burned and crippled children are known worldwide and are just a part of the work we do.

WHAT DO FREEMASONS BELIEVE IN?

All Masons believe in one God, the importance of charity and in respect for one another. Beyond these core beliefs, Freemasons’ thoughts regarding religion, society, and politics vary at the extreme.

HOW DO I BECOME A FREEMASON?

To become a Freemason, you need to ask a Freemason to recommend you, probably a friend. Next, you will sign a petition, stating your age, occupation and place of residence. Members of the Lodge will then vote on your admission after careful consideration of your character and reputation.

If you don’t know a mason, you can contact a Lodge close to you for more information. Most Lodges are listed in phone books under Fraternal Organizations. You can also simply google “Freemason lodges near me.” Ask around in your family. You may be surprised to find your father, grandfather or uncle may be a Freemason.

If you would like help in becoming a Freemason, please feel free to contact us. Prospective members are always welcome to join us for dinner before our regular stated meetings.

WHAT ARE THE QUALIFICATIONS TO BECOME A MASON?

We are proud of our philosophy and practice of “making good men better.” Therefore, only men aged 18 or older and of high character are considered for membership. Applicants must also state their belief in the existence of a Supreme Being.  Atheists are not accepted into our fraternity. God is the foundation of Freemasonry, hence the “G” included in the the “Square and Compasses

WHAT IS A MASONIC LODGE? 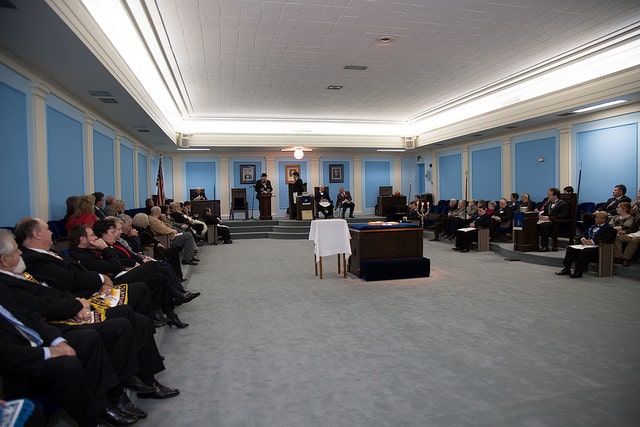 The term, “lodge,” comes from the structures the medieval stonemasons built against the sides of the cathedrals during construction. During the winter, when construction work stopped, they lived in their lodges and worked at carving stone.

Masonic buildings are sometimes called “temples.” Much of the symbolism Freemasonry uses to teach its lessons comes from the building of King Solomon’s Temple in the Holy Land.

WHY IS FREEMASONRY SO SECRETIVE?

Freemasonry actually is not very secretive at all, although the fraternity certainly seems to have gained that reputation. We make no secret of our membership. We wear rings, lapel pins and baseball caps with Masonic emblems. Our buildings are clearly marked and are listed in phone books. Lodge activities are even listed in newspapers in smaller towns!

That said, like most fraternities, we do have some secrets. These secrets fall into two categories:

We have special grips and passwords (like many other fraternal organizations), which we keep secret so that unscrupulous people can’t pass themselves off as Masons to obtain assistance under false pretenses.

Secrets that Can’t be Put into Words

When you truly accept responsibility for your own life and realize that real happiness comes from helping others, you experience certain changes. It is almost impossible to put these changes into words, to describe them to others. (It’s like trying to describe a sunset or the feeling you get when you hear our National Anthem.) It’s not that these “secrets” may not be told, but that they simply cannot be put into words.

IS FREEMASONRY A RELIGION?

No. God is the foundation of the fraternity, and therefore religion plays an important part in freemasonry. We accept men of all creeds: Christian, Muslim, Jewish, Hindu, Sikh, Gnostic, Zoroastrian, Druze, etc. However, freemasonry itself is not a religion, but a complement to it. Freemasonry promotes no dogma beyond love for God and charity for our fellow man.

We open all meetings with prayer, and one of the first lessons we teach is that one should pray for divine counsel and guidance before starting important undertakings. But we are not a religion. We believe strongly in the importance of religion and encourage our members to be active in the religion and church of their choice. We teach that without religion, a man is alone and lost and cannot reach his full potential.

IF FREEMASONRY ISN’T A RELIGION, WHY DOES IT USE RITUAL?

We all use ritual every day. Shaking hands when you meet a friend is a ritual. Standing for the National Anthem before a baseball games is a ritual. Our lives are filled with ritual. When you think about it, there’s nothing unusual about ritual. It’s part of everyday life!

Freemasonry uses ritual, because it is an effective way to teach the important values of the fraternity. Freemasonry’s ritual is very rich because it’s so very old. It has developed over centuries to contain some beautiful language and ideas.

WHAT IS A DEGREE?

A degree is a level of membership in the Freemasonry. It is also the name of the ceremonies by which you attain the three levels of membership:

During the Middle Ages, when a man joined a craft, such as the stonemasons, he was first apprenticed. As he learned the skills of the craft, he became a “Fellow of the Craft.” (What we call a “Journeyman” today.) And finally, he attained the level called “Master of the Craft.”

As a candidate, you’ll attend three meetings to receive the three Masonic Degrees. The Degrees are solemn, enlightening lessons and are an enjoyable experience with absolutely no uncomfortable or embarrassing moments.

It is through the Degrees that the principles of Freemasonry are taught and where you’ll learn that your family and your own necessary vocations are to be prioritized above the fraternity.

Once you become a Master Mason, you will be welcomed as a “Brother” in any of the thousands of Masonic Lodges throughout the world.

If you would like to learn more about Freemasonry, please feel free to reach out to us. We promise to get back to you as soon as we are able.